Below you will find some fun social media projects. Each one is tied to a specific goal related to organic search.

We’ve spent a lot of effort on Facebook & Instagram advertising over the years, but we were particularly active in 2017 & 2018.

We kept this ad active for over a year, and it was always profitable. For most of that time, the CPAs were under $10. We could see that this video was driving conversion across all of our channels: organic search, Google Shopping, Amazon, and of course social.

Of those 1.6M views, over half were organic. We basically used the ads platform to kickstart a viral phenomenon, and then used ad dollars to keep the post circulating. It was delightful.

As of now (and for the past three years), we rank #1 organically on Google for “custom underwear”.

We built a storefront platform onto all of our websites in 2014. Anyone could create designs, post them for sale, and launch their store.

To prove the viability of this new platform, I needed to launch my own stores and hold them up as examples. For my Customized Girl store, see below.

The idea is for everyone to take their Dad’s favorite joke, format it as a t-shirt, and get it printed. Then you knock on your Dad’s door wearing the shirt. After all these years he will realize that you were actually listening. You actually enjoyed that joke. Is there a better way to say “I love you”?

To promote it, I turned to an old hobby: collecting weird patterns from culture. For example, I saw that a significant number of popular web comics all have their own variation on this concept: What would happen if two Dads met on the street, and they were both wearing “#1 Dad” t-shirts?

I had already been collecting examples of this phenomenon. It had Dads. It had t-shirts. It was perfect. So I started posting on sites that could generate viral traffic like reddit and imgur.

That first imgur post links back to the Dad Joke Manifesto on tumblr, which in turn links to the storefront.

I continued to add new posts, each one with even more examples of this phenomenon. Finally this post (which linked to the original imgur post), went viral.

A week later, we ranked #1 organically on Google for “dad joke shirts”.

What storefront should we launch to prove out the platform for Customized Girl? That was an easier question to answer.

We had already been working on a fun experiment: the Tees and Tanks tumblr blog.

Depending on the history of a brand, it can be a challenge to launch a new social media presence and expect people to get engaged. How many customers are eager to read the next post on a corporate blog?

But there are always angles. For Customized Girl, we started photoshopping funny memes onto shirts, and posting them to tumblr. We were great at it.

So we launched our own Tees and Tanks store on Customized Girl. We started mixing in our own original creations with the meme posts. (Old paintings from the public domain were very helpful.)

We went from 0 to 30,000 storefronts in five years. Not all because of Tees and Tanks, but it helped.

This project also helped with link building. We went viral and we got to see what happens when you hit six figures in the tumblr dashboard.

The answer: the dashboard breaks. The graph only allowed for five digits on the y-axis, but we were clearly above 00,000.

This success led to incomings links from HuffPo and Yuppee. 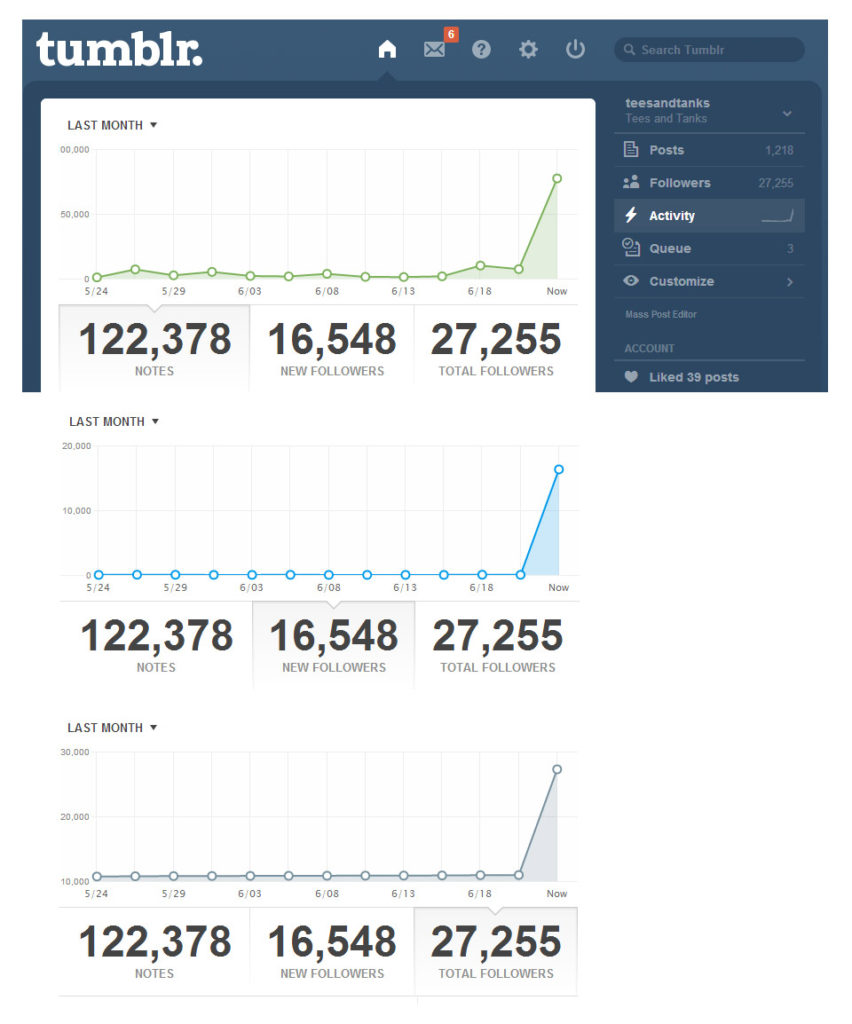